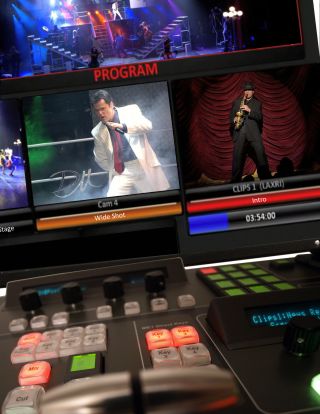 “The new Fluent Clip Store is an important milestone for Broadcast Pix,” explained Ken Swanton, president of Broadcast Pix. “Some switchers in the industry feature limited storage for basic animations, but no other company offers a production switcher with a true clip store. With Granite Version 1.3, we are delivering HD clip and animation playback with stereo audio through an integrated content server.”

Fluent Clip Store is so well integrated into the Granite workflow that clips can be instantly accessed from the control panel with file names displayed on the PixButtons. In Fluent Multi-View, clip thumbnails appear along with file names and metadata, while active clips play in real time and display a clip counter. Clips are easily imported to Granite using Fluent Watch-Folders and begin playing automatically on the transition to air.

Version 1.3 also provides stereo audio output for the new Fluent Clip Store and Granite's existing Fluent Animation Store through XLR connectors in the rear of the Granite system. Granite’s dedicated Fluent Animation Store is ideal for animated backgrounds, logos, or transitions. Animations can be created on the built-in Inscriber CG or uploaded from external programs such as Adobe After Effects.