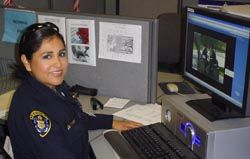 Officer Anna Rodriguez shows off the San Diego Police Department's IP-based surveillance system, which is being used to gather evidence to prosecute quality-of-life crimes in the City Heights area.
Steven Rosenbloom, mid-city division prosecution officer with the San Diego Police Department, was given the task of eliminating the prostitution that had taken over whole blocks. Working with the city attorney to craft a practical solution, his challenge was to find a way to make the laws work. To make a charge of loitering with the intent to commit prostitution stick, Rosenbloom said police must document the easily recognizable behavior for at least 20 minutes. The use of Sony IPELA SNC-RZ30N cameras allows the police to spend time on other issues while the cameras gather the evidence necessary to prosecute these crimes.

"We have great laws to combat the problem," Rosenbloom explained. "The catch is that you need to have enough officers to watch. Remote surveillance via IP-connected cameras is an ideal way to leverage our resources to do just that.

"The City Heights area has been a problem for generations and nothing has proven to be very effective other than bringing a large number of officers to bear down consistently," continued Rosenbloom. "The IPELA cameras are like another tool on an officer's workbelt. They give us what we need to enforce laws that are difficult to otherwise. Now we are able to create a virtual presence to achieve the same results through a more efficient deployment of personnel."

Latency seemed to be a problem with many of the systems Rosenbloom investigated. Then, he discovered that San Diego-based Dotworkz, an IP security integrator, had broken through to deliver imaging in real time.
"IPELA systems have proven themselves time and again as a force multiplier for law enforcement," said Will Ferris, Dotworkz's president. "The Sony SNC-RZ30N cameras are cost effective workhorses, and connecting them via wireless using our mesh implementation cuts installation costs to a degree unimaginable in the analog era. We were able to design a system that could start small, spark support, and generate success along the way to drive it to completion."

The pilot project began last summer with $70,000 to deploy three cameras linked to a video server running OnSSI's NetDVMS command and control system. An early indication of community approval is the additional funding being offered to follow through with full implementation-at a cost of approximately $400,000.

"The pilot project showed the community what this could do, and so we're well on the way to bringing this forward with donated funding," Rosenbloom said. "No one thinks that these systems are a replacement for officers, but they do give officers a new way to stretch out the long arm of the law."