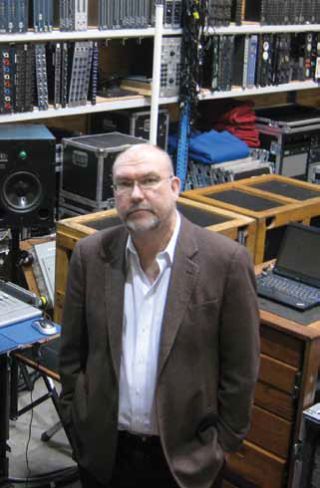 When asked what his favorite tool was, Leamy replied “common sense.”“I kind of stick at it.”

That’s Ted Leamy’s explanation for a lot of things. It’s how he explains the fact that, at age 56, he’s on only the third job of his professional career. It’s also how he explains how a guy with no formal education who was, as he put it, born “fat, bald, and stupid,” eventually became the vice president of Promedia/Ultrasound, and the go-to guy for installed sound in NFL stadiums. “Some guys come to me and go ‘Man, you are really lucky.’ And I say ‘I’m not really lucky. I worked really hard for 30-something years.”

In other words, he stuck at it.

Leamy is currently refurbishing the sound system at Lambeau Field, home of the Green Bay Packers. Prior to that, he oversaw the installation at Cowboys Stadium in Dallas, and after Lambeau, he will begin work on the new home of the San Francisco 49ers. He loves optimizing large sound systems, and still relishes the opportunity to work at what he calls the intersection of art and science. But as a self-taught man with no formal education, this destiny was not baked into the cake. “I decided not to go to school,” he explained. “I started out in music.”

Driven by a hormonal imbalance and the adventure of travel, Leamy hit the road, eventually finding himself working touring sound for Electrotec Productions barely before the age of 20. “I was the fifth man on a three-man crew,” he joked, “but I’ve always been involved with system engineering, system design, and system optimization.”

Leamy stuck it out at Electrotec for 23 years, climbing the ladder to eventually become president of the legendary company. “I was an inquisitive guy, and learned everything I know from the Mick Whelans and Mark Ganders of the world,” Leamy said. But for an adventurer, 23 years is a very long time. “My last seven or eight years with Electrotec, I wasn’t really on tour. I worked my way up from sweeping the floor to being head dude there, and I started telling everybody that ‘OK, I’ve done this, I’ve accomplished that, so now what?’ Well one day I was talking to [JBL vice president of marketing] Mark Gander on the phone, and he said ‘when you’re done there you should come work for us.’” That’s how Leamy found himself on the manufacturing side of the audio industry.

Even though Leamy got to work with one of his heroes, Mark Gander, brought out some great install products, and eventually landed as vice president of installed sound with the company, he inevitably got a bit restless. “It was far away from the action—far away from the front lines.” He started to ask himself that question again… What next?

Eventually Drew Serb, a friend of Leamy’s from his touring days and owner of Promedia/Ultrasound, approached him with a proposition—one that gave him autonomy, responsibility, and even partial equity. It also gave him the chance to work in sports arenas, an area he had been working very hard at with JBL. The move would give him the chance to learn new things, to build big things, and also, to hang out with some old friends. Needless to say, he jumped at the opportunity.

Leamy started working in touring sound at the age of 17—his version of running off to join the circus.Leamy prides himself on combining his years of practical experience with self-taught knowledge and strong work ethic, drawing constant strength from those two qualities. “I’ve found a pretty good niche for myself—to be respectful of everybody in the world of acoustics and academia, but also to be proud of what I know in the practical world.”

“This is like a stack of building blocks,” he explained, “and I’ve climbed up on top of these blocks. What I’m doing today is about everything I’ve learned along the way, which is about the audience experience. I say to folks when I’ve got my salesman hat on that anyone can twist a wire, but the reason I’m different is that I understand the audience experience. I’m not certain I know all that much about how DSP is compiled, and if you got me behind a console I’d probably just sneeze and walk away, but understanding that audience experience… you can’t do that without your own experience.”

His friend Mark Gander agreed. “All of this real-world practical savvy and business acumen is complemented by the personal experiences which he has gone through,” Gander said, “and his humanity is always in evidence, generous both in his style of handling those less knowledgeable and experienced, as well as giving of his personal time to charitable endeavors. His standards of quality and commitment to education add to the traits that make him a leader and a model for others.”

While Leamy is starting to ask himself that old question—“what am I going to do next?”— optimizing large sound systems is still exciting him after all these years. “For me it’s the most exciting because it’s the biggest thing,” he said. “Those crowds—that’s what’s exciting. And that sound system with the right design, the right implementation, the right operation—it’s not just design and install, it’s the art of using it. Get all those three things right, and the sound system can be an added element in the game. You’ve added an element to what’s going on. It actually becomes part of the whole experience.”

It’s the experience, both his own, and the one his work has provided to hundreds of thousands over the years, that makes Leamy stick at it.