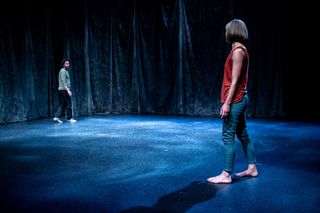 The Department of Theatre and Dance at the University of Alaska, Anchorage  (UAA) has taken delivery of Ayrton GHIBLI fixtures, Ayrton's first LED spot luminaire with a factory-equipped framing system. ACT Lighting, Inc. is the exclusive distributor of Ayrton lighting in North America.

GHIBLI delivers a light output of 23,000 lumens in a highly compact format.  Its proprietary optical system produces an extremely uniform fat beam with no hot spot. GHIBLI's selection of gobos and colors was made in collaboration with lighting designers to meet the needs of the entertainment industry.

Professor Daniel J. Anteau, the Chair of the Department of Theatre and Dance whose specialty is lighting design, had been looking to introduce cutting-edge LED moving head fixtures to use in UAA's Main Stage and Harper Studio Theatre. He saw GHIBLI online, inquired about the new light's capabilities and sought out GHIBLI users.

"I wanted to know if it was as amazing as it appeared online," said Anteau.  "It seemed to be exactly what I was looking for. Users told me how GHIBLI compared to other fixtures I knew. That gave me a lot of confidence moving forward."

Since his department does a mix of theatrical and dance performances it needed an LED moving head that could be "a bit of a hybrid," Anteau said, "something with vibrant colors, lots of great textures, movement, and effects often associated with dance and musicals on one hand, and something with a great shutter system, control over the CTO and the ability to be more subtle and nuanced."

GHIBLI offers a number of features that attracted Anteau. "I love the idea of full framing shutters; they're essential for theatrical use since neither of our stages is a proscenium venue and everything hits the stage at odd angles.  GHIBLI has a really fantastic zoom. Although our two venues are relatively short throws, with the wide-angle zoom that can focus most of the way through it, which is very helpful. I also love the two different frost filters and the variety of colors - not just the poppy, gaudy ones but subtle, tinted colors too."

Anteau intends to share the GHIBLIs between UAA's two stages. Although students have just returned for the new school year the GHIBLIs have already been used by Alaska's newest professional theater company, CAZART, on a production of "Lungs" by Duncan Macmillan with lighting design by UAA student James Kendall.

"The department's new season will run from October 2018 to May 2019, and I anticipate the GHIBLIs will be utilized on every production we do," said Anteau. "I expect heavy usage for 'Playhouse Creatures,' which opened October 26."

"I see the GHIBLIs as a bit of a recruiting tool for us, too," said Anteau.  He believes the GHIBLI fixtures will prove to be "quite accessible for the students. With very little experience they can jump on a console and start creating amazing effects. "I'm thinking of putting one in the lobby during our productions and programming a little sequence to generate interest with the audience. I want the campus population to come see and play with the GHIBLIs. I'm very excited for our students in Alaska to get their hands on this cutting-edge technology."