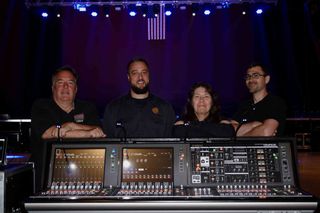 The new Hard Rock Hotel and Casino in Atlantic City has opened. After the purchase of the property, a complete renovation took place to what was once the Trump Taj Mahal. And, as part of the 6,000-seat Mark Etess Arena refurbishment at the Hard Rock, the company took delivery of two Yamaha RIVAGE PM7 digital audio consoles supplied by Mays Landing, NJ sound company, ACIR Professional.

“The arena at the Hard Rock has a very heavy workload and is a major tour stop for most recording acts,” said Bobby Harper, VP of sales at ACIR. “It also entertains sporting events, conventions, as well as in-house Hard Rock events that require high-level production capabilities.”

ACIR Professional provides sound, lighting, and video installations and rental systems to surrounding markets. “We were initially brought in to design, bid, and install sound, lights, video, and soft goods,” said Harper, who was the system designer and integrator for the project. “Speakers, lighting instruments, and video panels were fairly easy to determine based on the client’s preferences as well as visiting tour preferences. The consoles became the main topic. There were various suggestions by the Hard Rock, and after many discussions, it was determined that house and tour-friendly consoles would be required, with a Dante network backbone that could operate at 96K. Once these parameters were put in place, our only choice was to recommend the Yamaha RIVAGE Series.”

PM7s were installed at the front of house and monitor positions, on two separate Dante networks and can be combined easily if required. ACIR installed two Rio 3224-D2 second generation interfaces at front of house and another two at monitors. “The Rio interface has outstanding sounding preamps and many added features such as a controllable OLED screen,” Harper said. “The Yamaha D2 also allows for interfacing if a guest engineer is carrying a Yamaha CL or QL console. Patching can be achieved either locally on the console or with the Dante controller enabling other networking control such as latency and network troubleshooting. The entire network is setup with redundant backup through Yamaha recommended Cisco SG300 managed switches.”

“By the time I came on board, the whole system had been built and was on its way,” said Chris Carll, entertainment lead. The house audio crew in the arena consists of Carll, Gerard Lee, and Mary Jo Snelsire. “So far, we have been really happy with the PM7 consoles,” said Carll. “They are easy to use and customizable to your own personal workflow, and the channel EQ responds well, sounds very musical and responsive. Also, having all the plug-ins available on every channel is really nice, so you are not limited to just the premium rack.”

Although only into about 10 or 11 shows since the arena’s re-opening, Carll said that several guest engineers have asked to be set up on the PM7 so they could get a feel for the console or to build files for future shows. “I have a feeling that we will be using them a lot as more engineers convert their Yamaha console files over.”

Carll said the consoles were used for the Hard Rock’s opening ceremonies and to mix PJ Morton, the opening act for Maroon 5. They were also used for an HBO boxing event. “I was able to get a show up and running with only half a song for sound-check and was happy with my results at front of house. Our monitor engineer, Gerard Lee, was also pleased with his results from the same show. The broadcast engineers in the truck for HBO were happy with the clarity of the feed we sent them and commented on how our room sounded better than 90% of the venues they work at.”