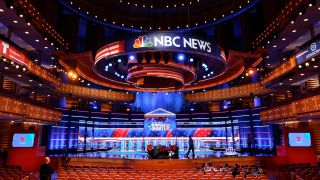 The first debate of the 2020 Presidential campaign cycle is now in the books, with over 15 million people tuning into the two-night event across NBC, Telemundo, and MSNBC.

The Knight Concert Hall inside the Adrienne Arsht Center for the Performing Arts in Miami was transformed into a television-ready environment for the event by the team at experiential firm Clickspring Design, which has also collaborated with NBC News on scenic design projects for NBC Nightly Newsand the Today Show. The stage design was lit by The Lighting Design Group with fabrication and engineering from Mystic Scenic Studios and LED from Leyard's CarbonLight line.

"Stage design for the debates is challenging due to the many shot requirements as well as variability in the number of candidates and show format," said Emmett Aiello, VP of design at Clickspring. "In addition, the set has to work for different venues, unknown at the time of the initial design, and be installed and show-ready in a three-day period. That being said, the energy and pressure of the live event are what make it a special experience."

With 20 Democratic Party hopefuls taking the stage across the two-night event, the design team had to balance flexibility with creating a unique sense of place.

"The White House, and in particular the architectural front elevation of the building, gives the set an iconic quality while reminding us of the stakes for the campaign," said Aiello. "Trends dictate that the set has to be contemporary both in style and technology, but it was important to us to infuse the concept with a bit of tradition and class, while touching on the theme of transparency."

To create this sense of transparency, clear acrylic panels etched with architectural and Presidential details are woven throughout the design. Starting downstage at the peacock sculpture, the edge-lit acrylic language continues through the lecterns and contextual elements around the LED. All the way upstage, a surround of LED pinstripes and blue cloth add the final layer of depth to the scene.

"Our goal with the design was to provide NBC maximum flexibility of background content, by using LED tile, without the set becoming just a big boring video screen," Aiello said.

The LED backdrop was used to display not only the traditional debate backdrop of an American flag and network logo branding but also a 3D illustration of the White House.

"Design is a collective process, and NBC put together a great team for this one,” Aiello said. “Senior design director Kendra James collaborated closely with me on the design, with myriad contributions from our entire Clickspring Design team. Steve and Niel’s lighting really gave the set its depth and richness, and Ben Jacobsen’s engineering of the build was both smart and true to our design intent.”