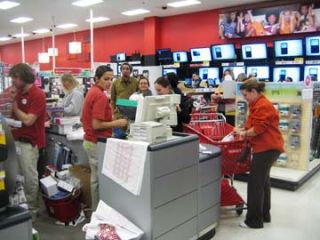 David Keene– Remember when “Black Friday” was just an industry-insider term? (Ostensibly, the day that retailers finally got into the black after the winter-spring-summer months of expenditure-sucking outlays for largely empty stores.) Before it was not just the start of the holiday shopping season, but a “Friday” that is actually a 4-day micro-marketing event unparalleled by any other trade or consumer program. Of course this industry is focused not on retail numbers per se but on DOOH results. How does DOOH figure into the events of this past week, a week that is not so much the kick off of the holiday shopping season, but perhaps the start of what will shape as probably the most interesting year for our industry since the birth of DOOH a decade or so ago?

The raw numbers are amazing. According to the NRF, a record $52 billion spent this Black Friday– from Thanksgiving through Sunday– or $398.62 per shopper, a 9.1% increase from last year. The average holiday shopper spent $398.62 this past weekend, up from $365.34 last year. Conducted by BIGResearch, the study also found that online spending was significant, with shoppers shelling out an average of $150.53 on the Web, or 37.8% of their total weekend outlay.

Some analysts are worried about the shrinking margins inherent in the deep sales and discounting that were apparently necessary to get a lot of those bodies into the stores this past week. But I don’t think that’s a concern. We're not talking automobiles or big ticket items that have thinner margins. Clothing, and most electronics have high margin to begin with, so some margin erosion there is not the end of the world. It’s the web shopping component that caught my eye. After all, it does not help the DOOH industry (or many of our core industries in this country for that matter) when more shoppers sit at home in fuzzy slippers and shop online. My take: it’s not part of the normal tech-geek coverage you see in the trades, but one of the biggest issues out there is: many states are going to go after sales tax from Amazon, and other online vendors. California has already. Other states will follow. There is a lot of money at stake here. And it’s totally unsustainable that the likes of Amazon and other purely online retailers increasingly eat into local and national brick and mortar retailers’ market share while avoiding the payment of sales tax. This will shape up to be a hot political issue in the coming year– and its outcome will weigh much more heavily on the market than whether someone launches another content management software package or another line of media players or flat panels.

The DOOH market is, at the end of the day, about money. About margin. About tax regimes, and the shifting of economic trends as we head into a brave new world in the larger economy, not just our market niche. Great Black Friday numbers bode well for our industry– but there is a lot to be sorted out in terms of how the politics of a new shopper culture will play out this coming year.

New York - Earlier store openings, a bargain-hungry consumer and the lure of deeply discounted TVs and laptops contributed to the largest Black Friday sales haul in history this past weekend.