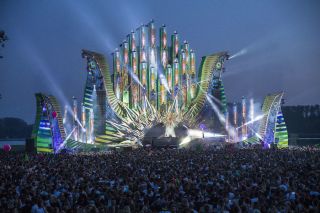 Mysteryland 2017
The MegaPointes were part of a production lighting design by Sander den Otter from T-MINUS Design for the 2-day event staged at Haarlemmermeer, a nature reserve just outside Amsterdam. Mysteryland 2017 brought a magical mix of great music, diversity, unity and superlative production values to 110,000 EDM fans attending from all around the world. The main stage with its complex and beautiful new scenic design by the Mysteryland team - led by creative director Sander Vermeulen - was the starting point for Sander den Otter’s lighting design.

Sander has been using Robe products regularly in his work for the last six or so years and was delighted to be involved in one of the live MegaPointe debuts.

The fixtures were positioned on the undersides of a series of large scenic pipes running up and around the set architecture, and were utilized extensively by Sander’s FOH operating team, as well as by all the visiting lighting and visual designers working that stage with their artists over the weekend.

MegaPointes threw light hundreds of metres out into the crowds for the camera shots – the event was both streamed and recorded – and created an array of funky, retina-burning effects during the various DJ sets. The line-up included many ‘greats’ like Armin van Buuren, Axwell Λ Ingrosso, Oliver Heldens, Deadmau5, etc.

The intensity of the units was “excellent,” commented Sander. He also appreciated the large zoom which make it a “proper and very nice” spot fixture as well as a powerful beam - just one of many features ticking the ‘multi-functional’ box, together with the prisms and myriad of other effects.
They were perfect for audience illumination and capturing the enthusiasm and spirit of the Mysteryland fans, actively engaging with them as their potent beams swept back and forth and up and down across the massive packed arena.