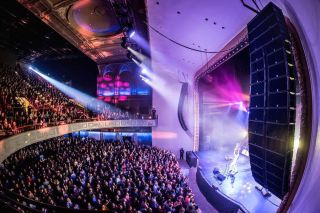 After being dark for three decades, St. Paul’s Palace Theatre has been renovated and now boasts a new L-Acoustics K2 loudspeaker system

Randy Hawkins, head audio engineer at the Palace Theatre and FOH touring engineer for the band Atmosphere, which headlined the new Palace’s first show, says that a steady stream of visiting artists between the reopening of the venue and the installation of the new system in August confirmed K2 as the best choice.

“The Pixies came through with the exact same system we have here now, and everyone was amazed at how good it sounded,” said Hawkins. “There were a couple of other systems in here on a temporary basis, but none of them could come close to what we have now.”

The venue’s main system comprises 13 K2 loudspeakers per side in a two-hang stereo system, each array topped with three K1-SB subs, while eight KS28 subs are ground-stacked below, four per side. The Palace Theatre is architecturally complex, with a tall 800-seat balcony over an open area that can hold another 1,700 people, but with a bar and other areas, such as the back of the main floor, that can be acoustically hard to reach. So Allied included a center-fill cluster of three Kiva II speakers in the design, with four X8 coaxial speakers for the front-fill array.

Allied President Chad Pechacek says that he turned to K2 for a number of reasons besides its ability to cover a challenging venue like the Palace. For instance, the venerable venue was built long before touring or installed PA systems existed, with few useful rigging points in the ceiling above the proscenium stage.

“The adjustable horizontal directionality, focus and throw that K2 provides in a lightweight enclosure gave us a lot of options for installation flexibility despite very limited placement options,” said Pechacek.

But the bottom line for the venue’s owners and operators was ultimately the system’s sound and acceptance, and K2’s ubiquity on touring riders was a major attraction.