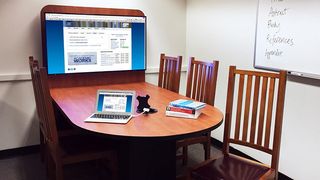 The John Jay College Of Criminal Justice (CUNY) included several small-group study rooms within the Lloyd Sealy Library in Haaren Hall, but their dated furniture, and lack of technology held little appeal for students. The rooms were essentially corners of the library outfitted with post-construction walls, meaning they were essentially no more than quiet rooms. The library, which holds more than 500,000 books, periodicals, films, microforms, and digital collections, offers students all the resources necessary for group study and shared projects, so the College was determined to incorporate new technology that would lead to greater collaboration and increase use of these rooms The high cost of building a system, however, motivated the school to explore more affordable and alternative options; leading them to FSR’s HuddleVU Collaboration system.

The college found FSR at the CUNY IT conference and was impressed by HuddleVU. FSR's HuddleVU creates the ideal environment for people to view and share ideas. The systems include all the necessary video switching equipment, control hardware, display power control and color-coded captive HDMI cables. It is a very simple, yet effective way to quickly install and use. According to Geng H. Lin, Library Systems Manager, “Everything was built-in and we wouldn’t have to reconfigure the current space, which was a concern. We decided to try two immediately.”

Once the FSR HuddleVU systems were installed in two rooms in the upper library, the College focused on stimulating interest via signage in the library, promotion on the library website and a notification to students via internal electronic communications. The rooms were quickly in such high demand that the College had to develop a reservation program that provided access to all in a fair way. The students were able to reserve the rooms up to two days in advance for groups of two to six in 1.25 hour increments, for a maximum of 2.5 hours.

The two HuddleVU rooms, as well as the reservation system, were such a success, and traffic increased so dramatically, that the College added HuddleVU’s in the Library’s lower three rooms as well. These more recent installations, just as the initial ones, took place all in one day and came in under budget. According to the College, the rooms “just work” for the students. John Jay’s Library Services division initially expressed concerns about increased help desk calls resulting from the dramatic increase in technology, but all proved unfounded. The HuddleVU’s are so intuitive and reliable that the students have been able to operate them with minimal instruction, and without asking for outside assistance. Even adapters and cables are available via the library desk if necessary.

In all, it was a simple and affordable system installed smoothly within a day.

John Jay College now has a user-friendly, self-contained system designed for group study. Students are able to use the HuddleVU system immediately following a few simple instructions, and are equally at ease using it for group projects, studying or displaying their work on the screen.

Lin says, “Students are extremely happy with the equipment — they are really enjoying it. It has been a great experience overall.”

The school anticipates a lot of collaboration amongst students when they have group projects and looks forward to adding systems as space becomes available.

Lin added, “I would recommend that our IT department consider this product for their conference rooms. ”