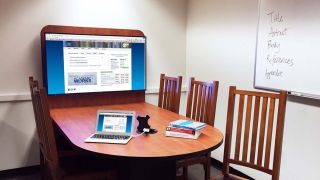 Lloyd Sealy Library, which holds more than 500,000 books, periodicals, films, microfilms, and digital collections, offers students a wealth of resources for group study and shared projects, but was lacking in technology to facilitate group collaboration. Following an evaluation process of affordable options that would create the ideal environment for people to view and share ideas, the school made the decision to install FSR HuddleVU Collaboration systems.

“Everything was built-in so we didn’t have to reconfigure the current space, which was a concern,” said Geng H. Lin, library systems manager. “We decided to try two immediately.” FSR's HuddleVU systems include all the necessary video switching equipment, control hardware, display power control, and color-coded captive HDMI cables for quick installation and operation.

Once the FSR HuddleVU systems were installed in two rooms in the upper library, the College focused on stimulating interest via signage in the library, promotion on the library website, and a notification to students via internal electronic communications. The rooms were quickly in such high demand that the college added HuddleVUs in the library’s lower three rooms as well. Each installation was accomplished in one day and came in under budget.

According to the college, the rooms “just work” for the students. The HuddleVUs are intuitive and reliable, allowing students to operate with minimal instruction, and without asking for outside assistance. The school anticipates the continuation of increased collaboration among students when they have group projects, and looks forward to adding systems as space becomes available. According to Lin, “Students are extremely happy with the equipment — they are really enjoying it. It has been a great experience overall.”