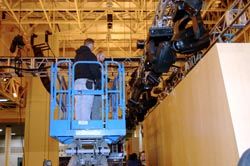 Students learn the basics of rigging and actually get to hang and angle lighting with Immediate Connections' training program.
In June of 1986, Patty McGoldrick started Immediate Connections (IC) in the attic of her home with $3,000 from her retirement account from the City of Boston. Patty McGoldrick (IC) established Boston's first temporary AV staffing agency in 1986.

After a few sluggish years in the northeast following 9/11, IC saw a significant increase in demand for temporary audiovisual staffing in Boston and the Northeast in 2006; the number of temporary staffing shifts in Boston rose from 3,500 in 2005 to 5,000 in 2006. This increase was due in large part to the number of shows coming into the new convention center in Boston. However, with this new growth comes a challenge to recruit highly trained AV technicians in the Boston area.

When a recent wave of new contracts landed on her desk, McGoldrick realized that she did not have enough AV technicians in the Boston area to fill the demand. With offices in five cities outside Boston, IC has a strong network in place to recruit trained personnel in other cities. IC had enough advance notice from clients to anticipate the demand and was able to bring personnel in from DC, New Orleans, Atlanta and Dallas.

Immediate Connections' staff headed by president and founder Patty McGoldrick.
Today McGoldrick has six offices and is doing $4.5 million in gross sales, a 15 percent increase over 2005. In the Boston office alone, sales increased 55 percent in 2006, partly attributed to the new convention center. Sales overall have increased by 100 percent since 2002, after slump due to 9/11.

Although IC was successful in bringing trained personnel in from other cities for this recent boom in activity, the company cannot continue to absorb the additional cost of doing this on an ongoing basis. McGoldrick now has a long-term plan in place to meet the challenge. "When you can't recruit," says McGoldrick, "you do the next best thing: provide the training yourself."

McGoldrick has initiated an accelerated and rigorous training and recruitment program in Boston and has even contacted her clients to get involved. "This is a win-win for everyone," McGoldrick explained, "and already a number of my clients have loaned equipment for the training classes." IC will continue to contact manufacturers who want to get involved with training classes on specific equipment so that technicians will know how to use the most advanced pieces of equipment. For more information visit www.immediateconnections.com.