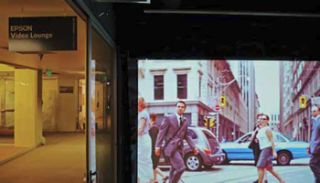 Video artworks—and the HD projectors that display them—are becoming standard features at international gallery shows, museums, and art fairs, such as Art Platform-Los Angeles. The 2011 Epson Lounge was curated by Paul Young, founder of the YoungProjects video art gallery in West Hollywood, a prominent showcase for moving image art works.The Swing, a video art installation by Claudia Hart, wasn’t just designed to provoke, it was designed to hypnotize. As viewers gazed at Hart’s artwork via HD video projection on a giant screen, the seasons of the wooded surroundings changed before their eyes—a stop-motion effect within the space of a few moments.

Video art enthusiasts prefer to see “moving art” like Claudia Hart’s The Swing under the best possible viewing conditions, which is why fans flocked to the Epson Video Lounge last year, a room set aside among thousands of other contemporary works showcased at the Art Platform–Los Angeles contemporary art fair. Art Platform–Los Angeles was launched in October, 2011, and will take place again this year from September 28-30, 2012. Thousands of artists, dealers, collectors, museum representatives, and art enthusiasts are slated to attend the fair held at the Barker Hangar at the Santa Monica Airport, minutes from the spirited Santa Monica Pier.

“These video artworks are meant to be displayed by powerful projectors on large screens in an immersive environment,” said Paul Young, YoungProjects Gallery owner, journalist, author (Taschen’s Art Cinema), and filmmaker who curated the 2011 Epson Video Lounge at Art Platform–Los Angeles. Young founded the YoungProjects video art gallery at the Pacific Design Center (The Blue Whale) in West Hollywood to bring new awareness to the moving image as a concrete art form, much like painting, sculpture, or fine art photography.

Young designed the Epson Video Lounge’s 500-square-foot viewing area, equipped with three Epson PowerLite Pro G5750WU projectors and three 12x9-foot screens. “I positioned the screens from the floor up, at full body scale, so the viewer really felt the presence of each moving image,” he said. To show the full range of video art, he screened three different six- to 12-minute videos on each of four days, presenting the work on a continuous loop per screen. He also placed downward-facing speakers on the ceiling in front of each screen, so each video would not compete with the others as the viewer approached the screen.

Stepping past the glass doors into the dim light of the Epson Video Lounge, the viewer was instantly drawn toward the large screen on the left. Ulu Braun’s Atlantic Garden slowly panned along a delightful, colorful landscape, where you could see and hear animated groups of people at an afternoon fête outside a hilltop mansion. Each moving element—guests, animals, and nature—was culled from a different source and pasted together, like a mural sized moving collage. The view of a brilliant blue sky and water in the distance soon opened up to a seaport and an ancient amphitheatre.

“The lushness of this video was a great way to show the bright color of the projectors,” said Young. “In the world of video art, the image is the most important thing.”

Collectors, galleries, or museums often purchase video artwork with a projector, so presentation in the Epson Video Lounge played as important a role as the quality of paint on canvas. Young had to set up the projectors to make each video installation shine with just the right degree of brightness and clarity.

“When buyers pay for a video artwork, they want the image to look as absolutely perfect as possible, whether it’s displayed in a contemporary or modernist setting, a home, museum or workspace,” said Young. “I don’t believe you can adequately showcase this kind of work on a TV screen or poor quality projector—not in its best light.”

Across the room, another giant screen beckoned the viewer. “There’s a Renaissance painting exploding in front of my eyes,” someone tweeted from the Epson Video Lounge. Sharp geometric shapes in Quayola’s Strata #1 leapt up from the surface of Italian paintings and building facades. Timed to pizzicato clicking sounds, the video created a hybrid of real paintings, architectural space and abstract two-dimensional patterns. The three-chip 3LCD projector brought out each detail of the image with 4500 lumens high color/white light output full HD WUXGA (1920x1200) resolution and up to 1500:1 contrast ratio.

“Several artists visiting the Epson Video Lounge said they’d never seen video art look like this before,” said Young. “Too often galleries or even museums think that they can get by with lesser quality projectors, mostly for budgetary reasons, and the image always suffers. Yet, most galleries or museums would never treat their paintings or photographs the same way. But that’s starting to change.”

Easy Set Up and Use

Young found the Epson projectors easy to install, connect, and run with his laptop computers. “Setting up the three projectors was one of the easiest tasks in creating the Epson Video Lounge,” Young noted. He especially liked the flexibility of the networkable PowerLite Pro G5750WU projector, being able to run different types of media, with HDMI, DVI-D, VGA and multiple video/ audio inputs. He was also able to use its multiscreen options, such as projecting two side-byside images from different inputs, or up to four images from network users.

“Plus, the lens shift of the projector is really essential to setting up projections in a variety of venues,” said Young, who curates video programs and exhibitions worldwide, most recently in Barcelona and Tel Aviv. The Epson projector comes with five lens options, including short-throw, longthrow and rear-projection, plus horizontal/vertical lens shift for flexible set up configurations.

The Epson Video Lounge was a venue for experimental film artists and contemporary artists alike to explore the medium and push it into new territories. On another screen, Ignas Krunglevicius transfixed viewers with his Confessions, a collection of eight confessions from actual convicted criminals, flashing only their words in varying fonts, among patches of light, at different tempos and sound levels.

Art Platform–Los Angeles, launched in 2011 by the MMPI Art Group behind New York’s influential Amory Show, was an opportunity to expose many out-of-town galleries and collectors to Los Angeles contemporary art. “The art fair made an impressive start and was good exposure because I’m working to bring video art to L.A. that doesn’t get shown elsewhere,” said Young. “There aren’t many galleries that focus exclusively on video art, although that trend is growing.” Art Platform–Los Angeles was launched in tandem with the Getty’s Pacific Standard Time initiative, a collaboration of cultural institutions across Southern California to celebrate the explosion of the L.A. art scene.

Other Art Platform–Los Angeles booths displayed video art on small monitors or flat-screen TVs, but none displayed the large projections of the Epson Video Lounge. “There was a time when the best galleries in the world wouldn’t even show video work, but now virtually every major gallery in the world has at least some video work in its program,” said Young. “High-definition quality projectors are taking on a bigger role with the explosive growth of video art.”

Key Elements / / /for the End-User

Ease of Use & Flexibility: Gallery owner Paul Young found the Epson projectors easy to install, connect, and run with his laptops. “Setting up the three projectors was one of the easiest tasks in creating the Epson Video Lounge,” Young explained. He especially liked the flexibility of the networkable PowerLite Pro G5750WU projector, being able to run different types of media, with HDMI, DVID, VGA, and multiple video/audio inputs. He was also able to use its multi-screen options, such as projecting two side-byside images from different inputs, or up to four images from network users.