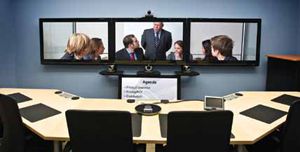 GCS’ Center Takes The Complexity And Cost Out Of Videoconferencing

Anchored by a telepresence suite and an executive videoconference suite, the 4,000-square-foot facility also houses several smaller rooms, including breakout seating areas, a kitchen, and a dedicated meeting space. Taking square aim at a client base including Fortune 500 companies, small and midsize businesses, government agencies, colleges and universities, law firms, and health care providers, just to name a few, the center promises to serve as a lively conduit of sales force communication and training.

“If there’s any one thing that’s truly unique about what we can do with this new facility,” said GCS owner Steve Garber, “it’s to provide state-of-the-art video communications to companies and organizations who aren’t able to make these types of investments on their own, but still can benefit from the technology. More to the point, if you don’t have the budget and don’t know how to do it, here’s the answer.”

A Firehawk 100-inch diagonal screen from Stewart provides the suite with ample room for display. Custom-configured to enhance the space, Brightline T-Series lighting rounds out the list of major elements found within the bill of materials used to complete the room, along with an Arcam DV79 DVD player and 1080p digital projector from M-Vision. The latter was deployed using an above tile, CMS440 suspended ceiling kit from Chief’s Speed-Connect Series, and a CMS018W extension column/ RPMA260 projector mount also chosen from the Chief catalog.

“There’s a lectern in the front of the room, so we commonly train one camera on the presenter, and another on the audience,” Garber said. “Conversely, if the room is being used for training, one camera can be trained on the presenter while the other is focused on a whiteboard. Viewed split-screen, both video streams appear simultaneously in full 1080p. There’s no degradation in picture quality, regardless of whether you’re using the cameras for data sharing or to capture content.”

“The screens are certainly one of the main focal points in the room,” Garber explained, “and when you’re building a video wall of this size, how they’re mounted is critical to both maintaining the aesthetic appeal of the space and the system’s function.”

To obtain the sleek look GCS was seeking, save time and money on the installation, and position the screens in precisely the right locations and angles, three FUSION Series model XTMU tilt mounts from Chief were chosen for the larger screens, while a FUSION LTMU mount was selected for the 50-inch confidence monitor.

One challenging aspect of hanging the three main screens was arranging them in a perfect line without any gaps between the units and at an absolutely uniform and level height. The FUSION mounting system met these demands handily, tying the screens together as a single entity. Providing up to 23.5 inches of lateral shift, the FUSION XTMU mounts additionally allowed the entire assembly to be positioned exactly where it needed to be without concern for where the studs were in the walls.

“Using the lateral shift feature, we were able to hit the studs quickly,” Garber said. “With the mount’s capacity for easy height adjustment helping to speed up the installation process even further, we had the screens in their proper places and securely locked into position all in less than an hour.”

Looking toward the future, GCS has designs to set up a number of telepresence and videoconferencing rooms around the country. “Having consistency in the layout of the rooms you’re building connections between is a big part of creating that level of transparency that makes telepresence technology so realistic.”