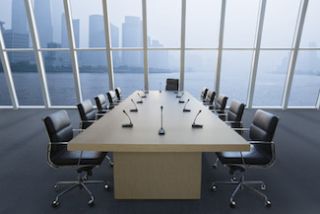 Flexible work environments and reconfigurable office spaces present particular challenges to conference audio solutions providers. Yet through the appropriate implementation of wireless, wired, and networked microphone products, often in tandem with DSP, integrators can arrive at an intelligible solution.

“When I teach audio classes for InfoComm, I always start out by explaining that the two most critical components in any sound system design is selecting the right transducers: the right speaker and the right mic,” said Gordon Moore, president of Lectrosonics. “If you do that, everything else falls into place. If you don’t, it doesn’t matter what’s in the middle, it’s not going to work well.”

Selecting the right microphone for flexible environments such as huddle spaces is especially important, he said, “Because the failure to choose properly is taking an already complex acoustical situation and making it impossible to contend with.” There is another issue: “You never know where [people] are going to be sitting and where to place the microphone.”

Shure has effectively sidestepped the issues of an increasingly crowded UHF spectrum with its MicroFlex Wireless range, which uses the DECT band, from 1920 to 1930 MHz, with Dante networking between the transceivers, interfaces, and charging stations.To that end, said Moore, “We’ve got a plug-on transmitter, the HM, which can adapt any condenser microphone to a wireless capability. Properly configured, you could pick the microphone that’s going to serve the purpose the best, set it on the table, plug on the transmitter, and that goes wirelessly off to the receiver.”

“The best solution is always to have the microphone as close as possible to the speaker and as far away as possible from the ceiling,” explained Holger Stoltze, senior product manager, Revolabs. “A variable room is a good argument against ceiling mics. Today my table might be perfect for that microphone, but tomorrow I might move it five feet further away and it’s no longer perfect. That leads to wireless microphones as a very good solution.”

Shure has effectively sidestepped the issues of an increasingly crowded UHF spectrum with its MicroFlex Wireless range, which uses the DECT band, from 1920 to 1930 MHz, with Dante networking between the transceivers, interfaces, and charging stations. But whatever the RF spectrum being used, challenges remain. “Wireless channel counts are going up because everybody wants the flexibility,” observed Troy Jensen, senior market development specialist, Shure. “But they can’t afford the total number of wireless channels that they want, so they want to share wireless between several rooms.”

Moore also noted, “Just as with the microphone being closer to the source, the antenna being closer to the transmitter also provides an improved signal-to-noise ratio.” Creative solutions, such as careful alignment of a dipole antenna, which generates a toroidal pick-up pattern, can also help: “If you have it directly over the huddle space, your pickup pattern is focused very closely on just RF emissions in that vertical axis and helps reject signals like the TV tower 10 miles away.”

Audio-Technica has a solution for clients preferring a flexible wired system, according to Gary Dixon, sales engineer—Installed Sound: boundary and gooseneck microphones that connect directly to a Dante network. “I can put a network switch under the table and run eight, 16, or 32 microphones into a single piece of hardware and have one piece of network cable coming off of that and into the floor or wall,” he explained. Audio-Technica also offers its wireless SpectraPulse product range, which operates at around 6 GHz.

Biamp, Symetrix, and Bose DSP units enable A-T’s Dante mics to access the system logic, allowing integrators to custom-program functionality for the illuminated switch, such as muting options or call indication, said Dixon. “People can buy gear in a lot of places, but it allows integrators to add their customization and talent into the system and program these cool things. That’s not something you can buy on Amazon.”

The features in today’s DSP units can help integrators optimize the performance and intelligibility of installed mics, bringing echo cancellation and noise reduction algorithms to bear on the signals. But at the low end of the budgetary scale, “The processing power [manufacturers] put into these small devices is typically not good enough to really do echo cancellation all of the time,” said Stoltze, so the system simply mutes the channel.

Lectrosonics offers a plug on transmitter, called the HM, which can adapt any condenser microphone to a wireless capability.“One of the key things to be paying attention to in a huddle space design is reducing and keeping the reverberation time down so that you don’t have late-arriving echoes that go beyond the filtering capacity of the echo canceller,” said Moore. Huddle spaces are often in larger environments with longer reverb times, he observed, so acoustic treatment may be necessary, if the budget allows.

“In the audio world one of the biggest problems we always engage in with end users is the expectation of an extremely high quality audio experience when the physics of the room or the installation work against that,” he added. “We try to build in reasonable expectations to what is acoustically possible.”

Most manufacturers have specialists—such as those interviewed here—who can set those expectations, in addition to other human and online resources. Local reps and integrators may also offer demo systems, especially for the more complex high-end and costly systems. Because, as Dixon put it, “You wouldn’t buy a car without test driving it.”

In our January print issue, managing editor Kelleigh Welch looked into the shrinking RF band and what it means to integrators and microphone installs. Check it out here.