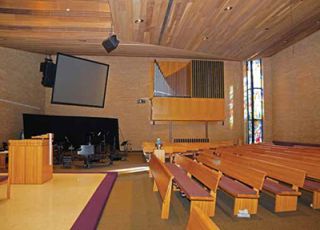 When Audio Logic Systems first arrived at BUMC, they faced a daunting task: deliver significantly improved clarity and musicality to the highly reflective congregation space, which had last received a new sound system in the mid-1980s. Somewhat uniquely, the 400-seat congregation faces the long side of the rectangular room, with the altar located approximately one third of the way to the left, and the full band musical ensemble situated on the same side but all the way in the opposite corner. Parallel walls of untreated brick, hard pews, and a tight carpet all added to the reflective properties—meanwhile, church officials specified that no acoustic treatments were to be used.

A line array from d&b’s White range placed above the band in the corner of the rectangular room. “The main challenges were intelligibility improvements over the old system, and performance imaging,” said John Simshauser, director of operations for ALS . “They have one space where speaking and preaching is done alongside musical performance, with an entirely different acoustic image needed for the band and the worship team.”

After preliminary meetings, ALS specified a completely new audio system, then demoed it in a temporary staging during one BUMC weekend service. “Gear is really secondary when picking an AV integrator—the first choice for a small church, in our opinion, is for them to pick somebody who they can trust and work with,” Simshauser noted. “One of the things we do in establishing that trust for most of our clients is that we attempt to demo the speaker system. We did that on this one, and it gave the congregation the confidence to make a major investment.”

ALS ’ convincing solution was to provide a d&b xA-10AL-D & xA-27A line array from d&b’s White range of integration products, placed above the band and located in the corner of the rectangular room. Meanwhile, a d&b xS-10S-D (also from the White range) point source speech system faces the congregation from the long side of the rectangle.

“What they had previously was a distributed system for speech, while the band had a little powered PA, with speakers on sticks, that was just spraying the rest of the room,” Simshauser said. “It was two completely disparate systems that weren’t functioning well together, and they weren’t functioning well on their own. That was a big design factor: to have the two rigs working as one system—we made sure that they function nicely together while maintaining the acoustic image. One of the things that the d&b is known for is equal voicing across all of their lines.

“We were going to have reflections no matter what we did. So we wanted something with a very natural sound and good pattern control. That way, the natural qualities of the reflections were helpful instead of detrimental. That’s where the d&b system really shines.”

The Allen & Heath GL D80 digital mixer in the FOH position was an equally important part of the equation. With a 100-percent volunteer staff—with nary a part-time techie onboard—an extra-intuitive tool was needed.

“Usability, price point, and sound were all key considerations,” stated Simshauser. “The interface of the GL D-80 is easy for us to teach and for them to grasp. It’s set up so the control of the two independent systems is seamless, and the volunteer operator never has to worry about keeping the different speaker systems straight. The pastor’s mic goes to the speech system, the singers’ and musicians’ mics go to the band system—that’s all programmed and operates underneath the ‘volunteer’ layer. There is an administrative layer that only our technicians and a few people from the church can get to. Some pretty complex routing is going on that’s not available to the volunteers, but they can still get to the other things like mutes and volume control.”

Reinforcing the upgrade are an Aviom A-16 personal monitoring mixer system with Westone UM1 and UM2 in-ear monitors, and Sennheiser wireless and wired mics.

“Musically speaking, dramatically reducing the stage noise has also improved the audience experience because, as with most small churches, the band is almost sitting in the audience when they play. That’s what we always strive for as integrators: to install a system with a very high degree of intelligibility, that also allows the artistry to come through.”