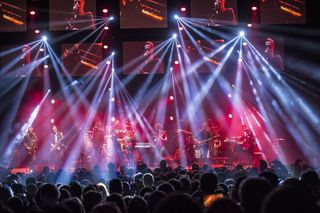 Design for Snarky Puppy had to be flexible. There’s no set list at Snarky Puppy gigs and they frequently change up the arrangements of songs. The tour also took the production levels up a notch with the addition of a remote operated robo-cam (utilising Panasonic AW-UE70 4Ks) system which was also operated by Francis along with lighting and the live mix, who took the challenge of multi-tasking in his stride.

Also informing the design was the itinerary, which included a wide variety of venues across the UK and Europe. The rig had to be scalable, and the final designs included an A rig for the UK dates and a smaller B rig for Europe.

Video and video sharing media channels have been prominent in the distribution of Snarky Puppy’s live material so the band are used to cameras, so with an average of 10 musicians onstage for a performance, Francis also wanted a neat way of featuring solos and came up with the idea of individual rotating screens and the camera system.

Projection also fitted as an appropriate aesthetic for the overall look and a solution that was flexible enough to be fitted into the smaller venues.

Onstage in the full set up were 10 x 2 metre wide super-light screens custom made by Hangman, arranged in two rows of five on two separate trusses. These were all rigged on Robe MediaSpinner 50 ATs, with a Portman P1 retro lamp on the reverse side of the screen, chosen for complete contrast and for their way-cool, highly distinctive flower-like appearance and warm tungsten output.

The projector was a single Barco 30K positioned at FOH and the four Robo-cam signals were fed into a Green Hippo Amba media server via a 4-in-1-out Quad-Split from Decimator Design, allowing any camera to be flexibly assigned to any screen.

Francis approaches the inventive structure of the music with one basic signature lighting look for each piece of music, within which he has a number of pictures and effects to hand that can be added, subtracted or layered in a similarly fluid and musical way. When it came to lighting and architecture around the space he opted for four raked upstage/downstage finger trusses, with four towers at the back extending the line of the fingers down to the floor at the back.

Twenty Robe Pointes were rigged on the fingers and towers and provided a great diversity of aerial looks, prism effects, beams, frosts, colour flips and all the other things for which they are great!

The wash fixtures were 30 x Chauvet R2s, 16 rigged in the air and 14 placed on the floor, and their task was to wash the band and the stage and help highlight the soloists as well as facilitate and augment the various camera angles and ensure clarity for the more technical shots mentioned earlier.

Some ETC Source Fours were added for key lighting, which was also important for the camera shots and eight Robe LEDWash 600s were available on the front truss for additional and support washes. A set of tungsten blinders highlighted the audience, all run from an Avo Quartz main console.

“It was essentially a bit of ‘back-to-basics’ approach to lighting,” said Francis. “Defining areas of the stage, creating an ambience and mood throughout the set and underscoring some fantastic musicianship”.

He says the biggest challenges were the expectations. “It’s a different audience to a rock, pop or dance crowd, very demanding, so it had to be an attractive yet thoughtful show that was totally cutting edge!”