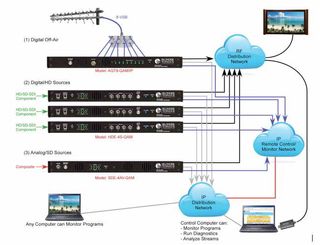 Many players within our industry have made it through the digital revolution and are in the midst of transitioning to IPTV. But with that being said, there are still a lot of coax architectures in commercial buildings around the country (e.g., corporate campuses, universities, airports, hotels, retail stores, etc.) that want to support video distribution. For those applications, is QAM or IP the best solution? The answer is both. A combined QAM and IP architecture broadens the number of users and use cases for the same content and where it can be viewed.

Digital video encoders feature simultaneous QAM and IP outputs. Used together, RF QAM signals are delivered via coax to traditional digital TV sets, while also delivering IP video to the desktop. Off-air local programs, locally generated studio content, and even national broadcasts of other networks can all be viewed on televisions, as well as via open source players such as VLC media player, through an IP network. This allows integrators to expand the reach of their video without having to run additional coaxial cable throughout the building and maximize the use of their IP infrastructure. (See Figure 1.)

Traditionally, an analog modulator takes in one source, typically baseband audio and video, and creates an analog carrier for those signals to ride on. Composite Video, Component Video, HD-SDI, ASI, VGA, and HDMI (unencrypted) are some of the signals that digital encoders can handle. With digital encoders, putting multiple programs onto a single QAM channel maximizes bandwidth usage. In addition to a QAM RF output, an IP output is available on some digital encoders. It can be run simultaneously with the QAM output, making the encoder invaluable for an integrator that wants to distribute video signals on both coax and Ethernet.

Once the encoder receives the incoming signal, it encodes that signal into a digital stream, in MPEG-2 or MPEG-4 format, and packages it with specific headers. In addition to the video and audio data, there are many other pieces of data that are included in a digital Transport Stream (TS) to standardize it for viewing by decoders. Encoders like the Blonder Tongue HDE- 4S-QAM provide multiple output options, including QAM, IP, and ASI, which can be utilized simultaneously.

Compression for QAM and IP Output

The encoding scheme, MPEG-2 or MPEG-4, determines the bandwidth utilized by the Transport Stream. MPEG-2 compression produces SD video signals in the 3-5 Mbps range and HD video compression in the 15-30 Mbps range. MPEG-4 compression, for comparable video quality, can compress the same signals 40 to 60 percent more than MPEG-2.

QAM modulation is the limiting factor in how many programs can fit in one 6 MHz channel slot. For QAM 64, 27 Mbps is the maximum, while QAM 256 yields 38 Mbps transfer rates. Depending on the amount of compression used, for great quality video, two HD or eight to 10 SD programs of MPEG-2 compressed can fit on a single QAM 256 carrier.

The Transport Stream is compressed and created prior to being set up for QAM and IP output. So the same two HD or eight to 10 SD programs will be present on the IP output stream and have the same bandwidth across an operator’s IP network. Multicast IP streaming is used to maximize bandwidth, sending the IP video streams only to the end devices that request it.

Monitoring and setup of the encoders is all done through an IP interface and a standard Web browser, eliminating the need for specialized software. Some encoder models even come with a hot spare input. This becomes useful in the event of a source failure, when the spare program can be activated and the system can be restored with a few keystrokes. Remote site monitoring can be done by logging in to the corporate network from offsite, or using remote control software that enables operators to control a computer at the remote site. This allows for performance diagnostics to be run on both the IP streams and QAM channels, with products and programs such as Wireshark, or a QAM tuner card and TS reader.

Utilizing the IP and QAM outputs of the encoder provides the best of both worlds when displaying and monitoring content in commercial settings, not only on standard TV displays throughout the system, but also using desktops and other connected devices to monitor programs, run diagnostics, and analyze streams. Whether the building needs to add to existing digital systems or put in a new system, the ideal solution is a digital encoder that offers the most versatility, with multiple program inputs and different output formats. Even if an operator is not utilizing both QAM and IP outputs today, these features may be needed tomorrow. Thus, an encoding system that supports both QAM and IP provides operators with a future-proof solution that maximizes the number of users and use cases for the same content and where it can be viewed.

Wes Waite is a senior systems engineer with Blonder Tongue.