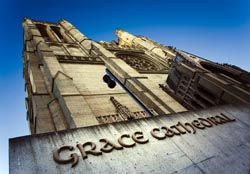 The church is now using the Sennheiser MKH 8000 Series microphones for recording and webcast purposes.]
While Yeap initially selected the MKH 20 and 40 Series for Grace Cathedral, area Sennheiser representative Marke Burgstahler demonstrated the new line of MKH 8000 high-end condensers. The MKH 8020 omni, 8040 cardioid, and 8050 super-cardioid deliver extended, flat frequency response (up to 60kHz), very low self-noise, and uncolored off-axis response. Moreover, all of the MKH 8000-series microphones are small, a factor that was aesthetically important for Grace Cathedral. Although the mics would hang from a hundred feet above the floor, they would still be below windows that would provide revealing top light.

Yeap ordered four cardioid MKH 8020s to cover the Grace Cathedral Choir of Men and Boys (only one of a handful remaining in the U.S.). He placed two more MKH 8020s above the congregation to capture congregational singing and orchestral performances, and two more at the back of the space to capture the rear gallery organ.

For the main organ-one of the largest in the state and famous to organ enthusiasts throughout the world-Yeap carefully positioned two MKH 8020 omnis. The extra octave at the bottom end of the omnis (down to 10Hz) conveyed the instrument's rich bass, and placement at the appropriate distance allowed the sound to bloom and blend with the room.