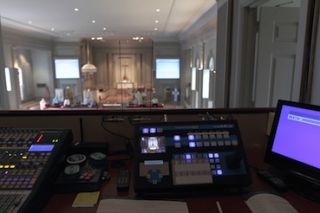 So when First Presbyterian Church of Greenwood, SC decided to introduce video production into their 55-year-old facility, the visual impact was a strong concern for the church leadership. "Traditional churches don't want technology to be visible," said Phyllis Lott, video volunteer for the church. "It takes away from the atmosphere of worship."

One of the additions desired was a video camera system — the church wanted to provide DVDs of their service to the congregation, send a video feed to the nursery, and enable the choir to see the service.

To meet the needs of the church, Hames Pro, an audio, video and lighting systems provider based in Greenville, SC, installed three Vaddio WallVIEW 70 PTZ standard definition cameras and a Vaddio ProductionView FX console to both control and switch between the cameras. Remotely controlled, these small cameras are easily mounted to walls or other surfaces, enabling nearly invisible placement in locations impossible to be serviced by a tripod-mounted camera system.

"Traditional placement using a camera on a tripod would have been constrained to the back of the sanctuary in the balcony," said Hames Pro Owner Russ Moore, systems designer for the installation. "The church wanted a more professional look and additional camera angles. We chose a rear center position mounted above the entryway for the main shots of the platform; a side shot to capture different angles of the platform as well as the congregation; and a third position at the rear of the platform facing out. This works great for capturing faces in the crowds, the organist, children's performances, and special events such as funerals, memorials, and especially weddings. With these three angles, the church captures three different shots of events that a tripod-mounted camera would completely miss."

In addition to eliminating the distraction of a large camera and cameraperson, the system has removed additional distractions as well. "When we have baptisms," said Lott, "we use the Vaddio system to record it for the family. We no longer have people jumping up with cameras during the service to capture the moment."

"It's working out great," added Lott. "It's very simple to learn, and the picture quality is excellent. I'm very impressed with the entire system. At Christmas our pastor dressed as a shepherd and walked around the sanctuary while preaching, and we were able to track him quite well using the joystick."