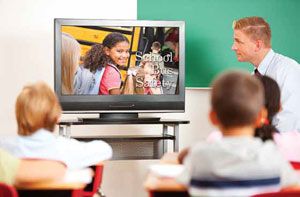 At Haivision, technology such as the Video Furnace Server and MAKITO high-definition video encoders are used to replace traditional coax systems which deliver analog channels right into the classroom.

It’s a puzzling equation. If a.) the demand for K-12 classroom AV is on the rise, and b.) education budgets are in decline, what is c.) the solution for manufacturers who want to answer the need with low-cost options in projection, streaming, security, AV controls, and sound reinforcement? Manufacturers and distributors provide some clues.

Utilizing AV in schools doesn’t have to entail an expensive rebuild of an existing infrastructure, said Steve Young, VP of sales and marketing, Atlas Technologies. “In fact, reliable educational AV systems can provide sound reinforcement for individual classrooms as well as integrate with multimedia devices and extend to campus-wide mass notification and security requirements.”

Structured cabling and network-based solutions installed by authorized AV professionals can be very affordable, especially with the cost and time savings that include benefits like synchronized clocks, event and bell schedulers, and pre-recorded messaging, he said. “The ability to use advanced teaching tools, improve student focus, and increase response time in the events of emergencies are invaluable tools to consider even with today’s tight educational budgets.”

And there is a rash of these new products specifically aimed at the K-12 market, wrapped around interactive functions, said Brian Rhatigan, business development manager, Almo Professional AV. “For a while, the interactive whiteboard was standard; now a handful of alternative products, such as interactive projectors, don’t require a board and have become affordable. The projectors have sensors that can detect when a user is operating an electronic pen. All communication takes place between pen and projector.”

The key selling point is that there is no need to invest in both technologies. “Interactive products, such as Sanyo’s PLC -WL2503 are a fraction of the cost of a traditional system,” he said. “Hitachi’s new StarBoard Link is aimed at reducing the cost of the interactive whiteboard. It’s just a frame with sensors that magnetically stick to a traditional whiteboard and make the surface interactive with the addition of a projector and PC.”

Hitachi, motivated by concerns over education budgets, is doing some advertising and aggressive pricing on those systems, in addition to their existing lineup of interactive whiteboards, with price points never before seen on whiteboard systems.

Rhatigan also notes the Enova Total EXPerience Kits, sold with a projector mount and speakers. That whole system has a wallmounted control pad, a presentation switcher with a built-in audio amplifier, projector mount, drop ceiling kit, and two speakers. “Chief also has something similar to that,” he said, “with the CoPilot Complete AV Room Systems.”

Mitsubishi is answering the call with new features to address budget considerations, said Wayne Kozuki, product manager, Mitsubishi Digital Electronics America. “We’re already known for low cost of ownership over the life of a projector,” he said. “Our new ultrashort- throw EST models are designed with no mirrors, completely new to the education market. No mirrors means no dust or dirt can get into the light engine, which can lead to product failure.”

Mitsubishi also offers a wide range of connectivity options, including new cuttingedge support for displaying content over USB and ethernet. “Security has always been in our models with anti-theft bars and optional password security,” Kozuki said. “We have AV control with our support for Creston RoomView and AMX Device Discovery, which makes connecting our projectors even easier, and our built-in 10W speakers with new Audio Standby support means that teachers can use the speakers even while the projector is in stand-by mode. School districts don’t need to buy additional speakers for a lecture hall or classroom.”

At Haivision, technology such as the Video Furnace Server and MAKIT O high-definition video encoders are used to replace traditional coax systems which deliver analog channels right into the classroom, said Scott Katzenoff, vice president, U.S. commercial sales. “If a teacher wants to show C-Span, using traditional AV cabling they would pull coax or cables through walls and ceilings. Video over IP technology from Haivision allows the students or faculty the ability to tune to specific channels right on their desktop computers or on the classroom display, by selecting a digital stream being broadcast on the school’s IT network.”

Additionally, he said, Haivision protects these streams through highly sophisticated encryption methods to conform to the requirements of the cable and satellite providers. “As traditional coax technology gets old, aging cable runs often break or become intermittently unavailable. And new coax runs are often expensive to pull and maintain over distances beyond 1,000 feet. On the other hand, network infrastructure is everywhere, and along with wireless networks, fewer barriers exist to accessing video anywhere on campus through a laptop, desktop, or even a mobile device such as an iPhone.”

Students like those at the Abbey School in Reading, U.K. (pictured) and the Hamilton Park district in Texas who are taught using DLP-equipped 3D projectors are more engaged and show more understanding of their lessons than students in classes with standard 2D lessons.

Katzenoff said a trend toward school consolidation is influencing the growth of technology. As schools increase in size and in the desire to digitize their video content, they can choose live or on-demand streaming across the school district’s connected networks. “We see a movement toward school consolidation, especially in the Southeast and Southwest, and particularly in rural areas where there is new construction and where kids are bussed into larger districts. It’s preferable to have 5,000 students in one K-12 district rather than in several smaller districts.”

With this consolidation, networks are a given. “Schools want internet and connectivity for teachers, so why pull coax when digital video sharing the same network has no limitations?” he said. “They can stream video across the entire district, leveraging the economies of centralized systems. That’s the biggest benefit; they can build a headend using video channels and stream content that is protected by encryption everywhere. Coax is so expensive to pull and maintain; by using network cables already in the walls they can stream throughout the whole district.”

So many districts today are connected via networks such as Comcast and others, Katzenoff said. “When new schools are built, they can take advantage of these networks across the district, and with fiber, they are a data network. Streaming content can be played on any teacher, administrator, or student computer, tuning into any number of channels through IP streaming. The benefit is the sharing of a singular head-end, and the teacher can determine what channels and time slots get recorded for rebroadcast or as video on demand. A teacher can set up a system to record a broadcast or schedule it for viewing or do ad hoc recordings for lesson plans. It’s like extra help. Video on demand is not limited to recording TV but video sources from cameras.”

When new schools are built, they can take advantage of networks across the district, and with fiber, they become a data network.

But in the ongoing transition to digital, how are schools optimizing use of their legacy analog equipment? From what he’s gathered from integrators, HDMI does not seem to be as reliable as analog in commercial installations, Rhatigan said. “With HDMI, there is a communication between a source and a display. It’s like a handshake, and it needs to take place before video is set. In a one-to-one connection and in a home it’s typically problem free.”

However, he said, in commercial HDMI installations, where you might have several sources and several displays, possibly from many different manufacturers routed through a matrix switch, this digital handshake can lead to system performance issues. “In addition, you’re more limited with cable distance with HDMI. I think analog is still alive and well. It’s safe to say that a good portion of content shown in a classroom is computer based off of laptops. While laptops are starting to convert, VGA is still very commonplace.”

Mitsubishi projectors include legacy inputs as well as current and future inputs with the support of HDMI, PC-less presentations support via USB A input, as well as simple USB B input support or even basic ethernet cable support to provide display content, Kozuki said. ”So our models support legacy needs, and are also designed to support cutting edge connections which may not be mainstream (yet) at all sites, but will provide future-proof insurance in their investment. So when the time does come, they will already have a projector that supports all of their connectivity needs.”