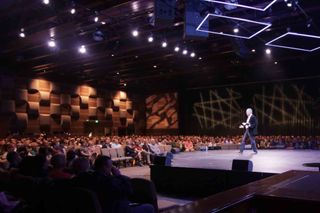 Advanced Audio & Lighting Systems was called in by Oak Pointe Church in Novi, MI to evaluate the space and provide acoustic analysis and treatment that would eliminate room anomalies, a process which would eventually lead them to supplying a new audio design based on a Martin Audio Wavefront Precision Compact line array solution.

“Part of the upgrade was to architecturally emulate a high school auditorium, what we affectionately call a ‘praise-a-nasium’. The original stage was low with poor sightlines. The church wanted to bring the stage experience closer to the audience, so they built a 30 x 40-foot circular thrust that comes out into the congregation with 130-degree seating around the stage."

Speaking with Charlie Koopman and Anthony Progar, the Church’s worship leader and technical director, Trent discovered “they needed a multifaceted space because the Church is very involved with the local community––they might put on off-Broadway plays, a dinner theater for 1,500 one night and contemporary praise and worship the next. Typical attendance is between 1,200 and 1,500 per service with the room capacity around 2,000.“

To accommodate this situation and provide uniform coverage, Advanced designed a main stereo-configured left and right line array system from Martin Audio, “that would cover from the downstage lip forward but avoid the near seats and also include everything 180-degree diagonal to the stage, which are treated separately. The stage is actually mobile––it comes out so when they strike it, they seat that area.”

The system consists of six WPC enclosures a side flown just ahead of the thrust lined up with the downstage lip to avoid impacting sightlines for center, left and right video screens and stay out of the way during play productions. Power is provided by five Martin Audio iK42 amplifiers.

“We used 2-box resolution [2 WPC enclosures per channel], with an eye to expanding to single box resolution with the spare iK42 that we have but it sounds so nice we haven’t made any changes,” said Trent. “All of which is why we greatly appreciate the small footprint of the Martin Audio WPC array. Also, the very flexible rigging that allowed us to easily optimize the system to the room without compromising performance.

“There are two hangs of three SX218 subs flown in a center cluster with a cardioid subwoofer pattern for directionality towed out at 45-degree to one another so we can avoid overlap. The PA also includes eight Martin Audio Blackline X8’s for nearfield custom cut in and wired into recessed areas of the rolling stage. There are three XD12’s for outfills and center fills covering the oblique seating at 180-degree for house left and house right behind the line array that also cover the close seating from the front lip when the circular stage is struck. The nearfield, outfills and center fills are powered by a Martin Audio iK81.”

Asked why they chose Martin Audio WPC line arrays, Trent said, “one of the main criteria for the church was fidelity. We didn’t want a traditional crossover point in the high frequencies or a typical compression driver at 1.2 kHz because of the way it sounds to the audience. The church does marathon events and they wanted a system the operators and audience could listen to for two or three hours at a time without ear fatigue.

“We needed control and directivity to avoid coverage where we didn’t need it, which we get from the system’s Hard Avoid capability. The surfaces are brick and steel with a huge reflective wall at the back of the room and the PA system drops coverage a few feet beyond the operator at the back of the house while staying off the ceiling as well.”