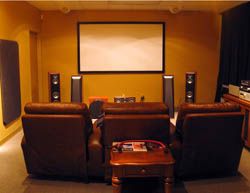 If we look at today's market we see several relevant examples of consumer/ residential features and benefits driving the entire market, including the commercial side. One of my own personal hot buttons is image quality. On the commercial side we have fallen victim to the "cheap lumen" school of thought where we throw a lot of light at a matte white screen and feel this is good enough. Of course this goes back to the days of 130-lumen light output three-gun CRT projectors that were dim at best. Somewhere along the line image quality did not remain the first order and light output did. Meanwhile, on the consumer/residential side manufacturers sold image quality and marketed an appreciation for a perfect picture.

The search for the "holy grail" of a perfect picture begat the art and science of display calibration. The Imaging Science Foundation began their quest back in 1996 and has trained thousands of technicians to properly adjust displays in a home theater. In the last two years, ISF Commercial has picked up the mantle and is now doing the same for the commercial industry. Suffice it to say, companies like Pioneer, SIM2, and projectiondesign have made their reputations on the high-quality images of their display devices.

In the recent past we have seen the consumer crowd champion true native 1080 HD while the commercial guys have been mired down until recently at 1366x768. On the consumer/residential side, HDMI is the connection of choice and others are just now catching up. A couple of years ago we saw the first LED backlights for an LCD display and the increased contrast was outstanding. This is yet another consumer/residential innovation that will become commonplace across all segments. Similarly, Blu-Ray players are now finding their spot in the commercial world as content catches up to consumer/residential. Last but not least, companies like Lumigen and DVDO have introduced us to signal processing and scaling at the highest levels, making sure that the signal and resolutions are maximized as they interact.
The examples of the "tail wagging the dog" are too numerous to mention in one article but rather than carrying on a classic Hatfield and McCoy type feud between segments let us all stop for a moment and pay homage to the launching pad of innovation that has historically been the driver of our audiovisual market and be grateful for those gifts.