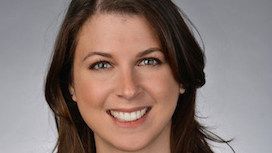 There was an explosion of the artist’s junk drawer. At least, that was the feel of the set at a recent performance in the American Realness festival, with random objects hanging from ribbon strung every which way and the floor scattered with props of varying shapes, sizes, and symbols. Upon entry into the small experimental dance theater, those of us attending were greeted with more such arbitrary iconography and invited to contribute to the unconventional stage décor.

The stars of the show soon made their entrance with a karaoke style introduction, emerging to mingle among the attendees gathered on stage. As we were invited to take our seats, choreographer Larissa Velez-Jackson proceeded to paint a foundation for her self-proclaimed career retrospective, the Star Crap Method of contemporary dance. The compositional methodology was wholly improvised by Velez-Jackson and two other contemporary dancers in the production, along with a mysterious grey and white shadow that lurked throughout the performance.

Somewhat strangely—albeit a bit of a misnomer in what was clearly designed to be eccentric—the show retained a structural integrity to that of any traditional stage production. Each dancer had their own solo, which they announced as such upon launching into a narrative explanation of their own improvisations, playing with props, sounds, and large reflective set pieces. The lighting design was also improvised, as demonstrated when one of the dancers playfully called to the designer as he posed against the wall, and she responded with a prismatic background effect.

The result was a lighthearted, deconstruction of the creative process. Every step of the way, the stars embraced self-retrospection and self-mockery. There were embarrassing moments of failure, which were welcomed as an exercise in humility. The Star Crap Method is as much of an experiment as it is a technique; a trial of artistic creationism.

The show was a refreshing reminder that the path to success is littered with bumps and sharp curves of every scale. In our business lives, the world can be a pretty serious place most of the time. While business goals naturally impel gravitas, the ability to look solemnity in the face and laugh at it is just as vital to the end game. Even in the face of her life’s work, Velez-Jackson exemplified how taking herself seriously involves the ability to laugh in the face of humiliation—or simply to laugh at any moment.

Embarrassing diversions are bound to arise in the work process. The challenge is to be confident enough to let them pass, and cool enough to chuckle and keep on moving forward. We can acknowledge our inevitable mistakes without allowing the potentially crippling side effects to take hold.