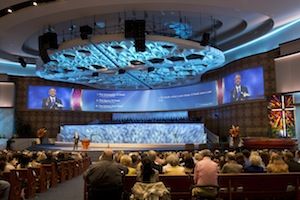 It used to be that ‘technology’—especially involving audio, video, and lighting—was somewhat of a dirty word in houses of worship. As a vehicle through which to communicate spiritual messages, it just didn’t seem right; it was too performance-based, too much like show biz.

At First Baptist Church of Dallas in Dallas, TX, the biggest technology element installed by Acoustic Dimensions is the screen that sweeps across the front of the room. The main visual image in the space is a 130-foot by 12.5-foot screen with seven HD projectors edge blended to create the continuous image.

These days, the number of churches that are still reticent to adopt AVL is far lower than those who are applying it, and the conversation about it has gotten deeper. “Now the discussion is not, ‘Is technology OK to use?’ but rather, ‘Which is the proper technology for us?’” said Donnie Haulk, president and CEO at AE Global Media, an AVL design/build and live production company headquartered in Charlotte, NC. “It’s a major shift in thought.”

This doesn’t mean that the bulk of houses of worship out there are buying technology for technology’s sake, however. Haulk noted that in order to serve this market, AV integrators must not only know their technical stuff, they have to get to know church they’re dealing with. “We have to make ourselves aware of what is effective, what type of tools to recommend for different ministries, know the ministry we’re talking to, and not be ignorant about the way they deliver ministry,” he said. The goal for integrators should be to assist churches in communicating better: “If we can be effective in what we recommend, we will help them to be more effective in the way that they communicate, and then they will grow.”

Craig Janssen, managing director at Acoustic Dimensions, an AVL and acoustical consulting firm headquartered in Dallas, TX, noted that this is arguably this industry’s greatest challenge. “The whole technology world is biased towards promoting products because it makes us money. It’s what feeds our families. But it may or may not actually be the most important thing to do,” he said. “The biggest challenge that we have as an industry is to figure out how to move from product-based solutions into client-based value propositions. It’s a major problem, and we fight that every single day.”

To address this, Janssen went so far as to hold training sessions for his staff based on the negotiation principles developed by Harvard, which focus on interest-based discussions. In other words: How do companies process what their clients’ best interests truly are? “Forget about technology—that’s not what’s important here,” he said. “What’s important is how you get to the root of what’s really important to the client.” This is not to say that the customer is always right, because we know that many times they are not. But in examining their best interests and the true purpose behind why they have sought your counsel, you’re better positioned to offer them real value.

Tim Mazur, sales manager at Clair Brothers, an AVL design and integration firm headquartered in Manheim, PA, pointed out that providing real value means that AV firms need to impose their own quality standards. “Instead of having the client dictate a budget and then try to fit all of their vision into a budget that is many times unrealistic, we would much rather be honest and be good stewards of their financial resources and say, ‘Your vision requires this budget,’ or, ‘Your vision requires this compromise to reach this budget,’” he illustrated. “As we know, because of the economy and for many other reasons, there are many contractors that would just be happy to get the job and ‘yes’ the client to the point of, ‘Sure, whatever your budget is, we’ll make it work.’” Which often winds up costing the church far more in the end. “It happens a lot, and we find those clients coming to us a year or several years later saying, ‘Please help us do our system correctly.’”

Another challenge that some companies are experiencing is that as HOW clients grow more tech-savvy, they require less design and integration assistance because they are taking on some of those tasks themselves. “What we’ve had to do, and what we’re still doing, is figuring out: What services can we provide in an environment where you have a very tech-savvy client and still bring value to the table?” said Jim Belt, senior project manager at Michael Garrison Associates (MGA), an acoustical and AVL design and integration firm based in Fresno, CA. The coordination and management of projects is one area where, he said, churches continue to need help. “Our natural position is to take a step back and say, ‘how is that system going to coordinate and integrate with what the church already has now? Where is it going to go in the future?’ That’s really what our emphasis is on, and maybe we don’t install stuff as much. Maybe there are some adjustments there. But where we bring value to the table is in establishing a very good path of coordinated systems.”

Belt’s colleague, Randy Garabedian, senior lighting, power, and scenic designer at MGA, notes that this often places the design focus on infrastructure. “We’re shifting from being that supplier, in many cases, to saying, ‘Let’s give you the design of what your facility is going to need and plan on that,’” he said. “That’s a cost in the beginning for them, but it’s going to be much easier for the church to implement this stuff later if the path is in place for them.”

While some churches may have highly knowledgeable technicians on staff, there are still many who don’t, presenting the opportunity for AV firms to provide training and support. “We’re finding that when training is offered, it’s invaluable,” said Daniel Durst, senior AV designer at MGA. However, this requires companies to be ready to be on call. “I’ve let my clients know that I’m ready and available if they need me. They try to respect that as much as possible, but when it’s an hour before a service and then run into a glitch, they know they have that support. You’ve got to have some kind of support so that your clients feel like they can get hold of somebody when they really are in need.”

As HOW clients grow more tech-savvy and require less design and integration assistance because they are taking on some of those tasks themselves, the coordination and management of projects is one area where Michael Garrison Associates is finding new revenue.

As is the case with practically every market right now, the church’s communications focus is on video, especially because there has been a shift in model: instead of adopting a ‘one campus fits all’ mega church strategy, many houses of worship extend their reach by occupying one main campus that can hold on average 1,500 to 2,000 people or so at any given time, and then several satellite campuses with capacities for several hundred people each. “It’s very easy to take what is working in a campus and scale it up technically through multiple venues, and there is no need to build a big building,” Janssen said. “You can scale the magic of the ministry. It’s trivial to do now. For that reason, there is very little argument for a single, large venue.”

Haulk points out that the challenge for churches doing video is creating good content and then managing it—a potential area of focus for AV integrators. “It’s how they manage their content that will determine how successful they are over the next 10 years,” he said, adding that this touches content development, management, editing, control, capture, and archiving. “That’s something that we push—understanding the value of your content, how to develop it, and then how to let other people see it.”