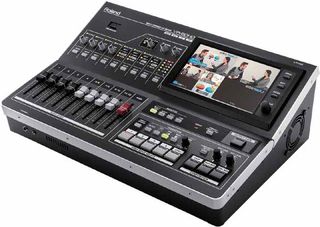 The Roland VR-50 HD Tech managers are well versed in the concept of doing more with less—and, in conjunction, attempting to get as much bang for their buck as possible. With video pretty much established as the communications vehicle, AV manufacturers are combining efficiency and cost-effectiveness in all-in-one products designed to simplify operations by enabling users to perform a number of functions that, traditionally, were only achievable with task-specific units. In other words, one-box-per-job is now evolving into one-box-fits all.

“All-in-one is certainly a rapidly growing category for us,” said John Broadhead, vice president of technology at Roland Systems Group in Los Angeles, California. “It really pulls together the video mixing side, the audio mixing side, monitoring, and the capture and streaming into that all-in-one unit.”

Broadhead is referring to Roland’s “VR” Series of AV mixers, such as the VR-50HD, which features a 12-input, four-channel multi-format video switcher, a 12-channel digital audio mixer, and built-in USB 3.0 for Web streaming and recording; as well as the VR-3EX, a four-channel SD mixer that combines HDMI inputs/outputs, USB streaming, HDCP support, and an audio mixer. Broadhead’s colleague, marketing communications Manager Rob Read, adds that aside from increased functionality, these products enable organizations to decrease the human resources required to run them. “It really cuts down on the number of operators that you have to have,” Read said. “You can get away with one operator doing the audio mixing, the video mixing, and the streaming or recording at the same time.”

With all of this functionality, how difficult is it to learn how to use these products? Not surprisingly, the manufacturers we spoke with claim that they’re not that complicated to operate at al—and most companies offer training videos, usually divided up into bite-sized chunks, online. Ellen Camloh, product marketing manager at NewTek in San Antonio, Texas—the manufacturer behind the TriCaster family of multi-camera video production systems—points out that the interfaces are designed in such a way to provide consistency throughout the user experience. “Especially in the case of TriCaster, it has an interface that ties everything together into one unified presentation; you don’t have to learn how to do this, and then go to a different-looking system and learn how to do that,” she said. She adds that the general user population is also increasingly video-savvy. “People create videos on their phones, so they know instinctively how to mix a video, and so onboarding people from that perspective is really very rapid.”

Gordon Moore, vice president of sales at Lectrosonics Inc. in Rio Rancho, N.M., says that in many cases, ease-of-use is reliant on how skilled the firm that installs the technology is. “The successful dealers that use these products develop very simple interfaces for the end users so that they don’t require a lot of training,” he said. In the classroom setting, for example, users may interface with systems via an iPad that is equipped with an app featuring icons representing different audio sources, such as the presenter or a media playback unit like a DVD player. “It can be a very simplified interface that pretty much anybody can get very quickly. The installer is the one that really has to have training.”

Roland’s John BroadheadNewTek’s Ellen Camloh Lectrosonics offers its ASPEN Series of DSP matrix audio processors such as its all-in-one conferencing solution ASPEN Trio, which is a matrix mixer with a telephone hybrid and a two-channel power amp. The series also provides TCP/IP control over Ethernet. Moore says that the ability to transport audio over Ethernet is in demand, especially for facilities like universities, where linking a number of classrooms in real-time is a necessity.

“A university may have 17 rooms that are all set up with these all-in-one units, and that’s great when that class is small. But what happens when that professor becomes extremely popular?” Moore added.

“With transport over Ethernet, they can set up very simple networks between those 17 rooms, and then have the option of routing Room 12 to Room 5 for overflow, and yet get the audio from Room 5 back to Room 12 so the instructor can answer questions and interact with the students in that classroom.” All this can be achieved, of course, through a simplified interface.

NewTek’s Tricaster in action But where manufacturers are making their biggest pitch for all-in-one products is in the area of ROI (return on investment). “You can try to put it together yourself, which means that you go out and get a video switcher, and then an audio mixer. And, then if you’re going to stream, for example, you have to pull those two pieces together and make sure they’re in sync, so you’ve got that box. Then you have to monitor, and you need an encoder of some kind to get it streamed or captured, and then you need the ability to make it sound good. So now what you have on the table is quite a few pieces,” Broadhead illustrated. And, with all of these different components comes the requirement for someone with enough technical know-how to operate and maintain them, 24/7.

Camloh notes that all-in-one products offer significant ROI to organizations of all sizes: smaller firms with limited resources may take advantage of all of the functions contained in one box, while larger companies may use that same box in different ways, across different departments, depending on their needs. “In a corporation, you might have two or three departments using it, and each one of them is using a different subset of the capabilities,” she said. “They’re getting the full use out of a complete multipurpose system because everybody is using what they need to use.”

There’s no arguing that seeing is believing. Bruce Bartolf, principal and CTO at Gensler, a global architecture, design, planning, and consulting firm, has spent the last several years working to find a way to make his organization’s enterprise video communications look good, sound good, and be simple to deal with.

“One of the things that global organizations struggle all the time with is creating a professional internal communications structure that fosters collaboration and communication,” Bartolf said. To Bartolf, who works out of Gensler’s San Francisco office, video was the key in making this happen, using the existing tool sets the company was already familiar with, such as GoToMeeting and Microsoft Lync. He also wanted a system that would enable the capture of meetings and, eventually, Webcasting.

After experimenting with some video broadcast technology, Bartolf zoned in on the VR-50 HD by Roland Systems Group. “The Roland system comes from music, from the DJ, from those kinds of things––from the land of mere mortal video production,” he said. “The power of the VR-50 HD is that it does just what you need it to do: it’s just enough audio mixing to handle four microphones, which is what we need. It does just enough video switching with four channels––that’s just what we need. It does picture-in-picture, which is really all we need. It does lower thirds if you want it to, if you want to set that up, but that’s not super-necessary.”

Bartolf notes that the system takes 10 minutes to set up, and once the presets are programmed, just as much time to learn. But the real pay-off, he notes, is the experience that he and his colleagues enjoy during meetings. “It creates a whole level of interactivity and it makes the meetings more interesting, it makes the content more vibrant, and it makes the content much more applicable. People feel much more connected,” he said, adding that this is extremely important for professionals working in such a visual industry.

“What this has done to low-end video production is what desktop publishing did to print; it’s bringing all of the tools together and making this video production stuff at a price point that is very approachable and doable for most organizations.”