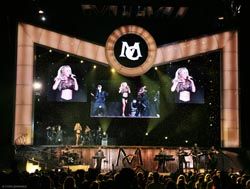 Mariah's opening number.In the same way that video production switchers have become centralized control centers for broadcast newsroom devices (such as servers, routers and character generators), today's lighting consoles are also evolving exponentially from single function units to remarkable multi-media control surfaces. These consoles enable a lighting director to control a wealth of tools that are definitely not limited to lighting fixtures.

A perfect example is the video and lighting system designed for Mariah Carey's recent "The Adventures of Mimi" tour. To stage the show, XL Video joined forces with Barco and Portland based Control Freak Systems to create a superb high-definition performance environment, the centerpiece of which was a GrandMA lighting console that included a fully integrated Encore Presentation System. Side-by-side with traditional lighting controls, Encore's image processing tools (and all of the system's video layers) could be assigned to any dimmer on the GrandMA. With ease and accuracy, the LD could size, position, color correct and transition any video layer, and perform completely synchronous video-plus-lighting cues.

GrandMA's in Charge
For Mariah's "Mimi" concert series, the multi-level set was designed by Los Angeles based Artfag. Barco gear included two ELM R18 projectors for side screens, four movable LED walls composed of ILite 10 tiles, and thousands of MiPIX modules for the stage's two architectural structures (a huge "M" that framed the stage, plus an "O" ring at the set's apex).

To complete the Barco array, twin Encore Video Processors provided 12 layers of HD video that could be routed to any LED wall on stage but the Encore Controller (the system's control surface) wasn't even used. Instead, out on the arena floor, the GrandMA console used DMX protocol to run the Encore via Control Freak's custom interface. Backstage, an in-line Control Freak monitoring station allowed a tech to keep track of all video layers - but for all intents and purposes, GrandMA was in charge throughout the show.

Protocols of Preference
In the video world, the protocols of preference are RS-232 and RS-422, both of which are bi-directional, high data rate standards for serial communications. In the lighting world, however, the protocol of preference is DMX, a standard for sending instructions to dimmers, lights, and other devices with innate intelligence. The protocol supports up to 512 virtual channels per "universe," and each channel has 255 steps of control resolution. A single channel can be assigned to control one aspect of a device, such as a light's pan, tilt, and color attributes. With the Control Freak interface, DMX protocol was used to address the individual attributes of Encore's video layers, such as size, position, brightness, contrast, opacity and much more.

"It's a phenomenal interface," says Joshua Alberts, video chief engineer for the Mariah Carey tour. "From a creative standpoint, the LD sits at his console and makes an entire show, with lights, video and Doremi playback at his fingertips. Without any specific knowledge of the Encore, he can use familiar lighting controls to adjust the video, but all in his own terminology. The Encore's there, it's just hidden inside the lighting board."

The Control Freak designers worked closely with Barco's engineering staff to fine tune the Encore/DMX interface. Ryan Pellicano, Encore's design engineer, attended Mariah's Sacramento concert (at Arco Arena) to see the interface in action. "This takes our system to a new level," said Pellicano, "and it's a completely different way of approaching the video. They've essentially taken our Processor and are using it as a toolbox. From the GrandMA console, DMX commands are interpreted by the Control Freak program, and then routed to Encore over Ethernet. They conform to the way our video layers work, but that's where the similarities end. In our video world, Encore is a program-preview system, but here, all the layers are on program all the time - but that's the lighting world's requirement."

Calling the Shots
In developing the interface, Control Freak's vision was to provide the LD with control over all video and lighting parameters from a centralized location. With fewer operators on line and the elimination of multiple control surfaces, the goal was a much smoother show and a higher level of integration between all equipment.

Joshua backstage at the Control Freak monitoring station
Keating also had high praise for Mariah, and her ability create a very precise on-screen look. "I've worked with a lot of female solo artists including Beyonce," remarked Keating, "but Mariah is one of those incredibly rare artists who knows exactly how she wants to be shot. Some artists entrust themselves to you, and I certainly like that freedom but I also enjoy the challenge of an artist like Mariah who knows how she wants to look, and I'm here to achieve that for her."

John Wiseman, CEO and President of XL Video, agreed that Mariah is the exception rather than the norm. "With some artists, you might get two weeks of rehearsals," said Wiseman "but with Mariah, she's one of those exceptional performers where you get four or five weeks in rehearsals to try things out.

Her management allowed the design team to experiment until we got the perfect mix. When Harold Jones, our production manager and I met with Justin Collie from Artfag, we worked out the best way to execute the design team's vision within budget," noted Wiseman, "and even though the show changed and evolved like a live organism, it was a very satisfying creative process, and we were really up for the task at XL."

Sparky's Take on "Video as Lighting"
Sparky Anderson, lighting director for Mariah Carey, has over 28 years of touring to his credit, "for every heathen rock band you could ask for," as he noted irreverently.

"As far as the technical aspects of the Encore and the Control Freak interface goes, it's a mystery to old school guys like me," says Anderson, "but from a control standpoint, it's wonderful. This is the only product I've used that not only controls all the lighting cues, but each and every video screen, size, layer and transparency. When Mariah goes to the chorus or starts a new verse, I can instantly change the video along with my lighting."

"Essentially, what I'm doing is not relying on another human's finger to be in the same rhythm and cueing structure, because it's all coming through my console," said Anderson. "In terms of my interface, I have another 12 layers on the console, but each layer is a fixture of video content. I'm out here controlling the LEDS on the stage, proscenium, ramps, and even the set's DJ booth."

Freaks at his fingertips
An additional Control Freak vision was to keep the interface entirely within the LD's comfort zone. Even without firsthand knowledge of how the Encore worked on its "local" panel, the LD should be able to catch on quickly. Just as any quality moving light has layers of functionality, Encore has layers of video.

"It's just like when I grab a fixture such as a Syncrolite," continued Anderson. "That light lets me do focus, position, color, and gobos, and those applications work just the same for video. I select a video layer, set my parameters and take it to program. For the bigger shows that are highly integrated in terms of lights and video, this interface gets rid of all the seams."

From Customization to Business Model
Stuart White is president of Control Freak Systems, and the designer of the Encore/DMX interface. Three years ago, having seen the need for custom media servers and some form of video control for lighting consoles, White and his colleagues began building "one-off" solutions. But after seeing the success of their efforts in live concert situations, they realized that other designers also wanted these tools, and the result was a company.

"Essentially, the interface is the Encore Controller built entirely out of software," said White, "but with all of its capabilities geared towards the LD. For Mariah's tour, we're the glue between what the GrandMA console speaks and what the Encore speaks. Where my job comes into play, is to make the HD video behave as much like a lighting element as possible."

"We also developed a remote monitoring station that allows a backstage video tech to see all the parameters for all the layers at once," continued White.
"This is something that you really can't do with the Encore controller itself, but it's necessary in this type of show environment. And because I'm an old Pro Tools(r) user, I laid out the screen just like faders."

Sparky and GrandMA
A Natural Progression
In the last few years, the size of video systems on tour has increased, as designers continue to use "video as lighting" with greater frequency. As witnessed with the Mariah Carey concert, the two camps are converging, with LDs getting smarter about video, and the video guys getting smarter about lighting.

"Working with the Control Freak designers, we've turned a few heads with this DMX interface," remarked Chris Prosio, Barco's product application manager for image processing. "There are some inherent effects engines built into the GrandMA that seamlessly ported into the Encore, and this allowed our system to be used in a way that was clearly not native to its original design."

"We know that the video director, working backstage and cutting cameras, can never be replaced," said Prosio. "But here, we're allowing the LD, the person with complete sight of the full stage, to control video elements in his own environment. It's a natural progression, and it works out to be a very good bridge between the two worlds."

John Wiseman summed up his crew's attitude towards the Encore/DMX interface, and also gave a glimpse into the future. "It's a fantastic product, and way ahead of the curve," said Wiseman, "I come from the lighting world, and I've been involved with other products that merge video and lights, because that's what the artist wanted. With Artfag and Control Freak, those guys are ex-lighting guys who have turned into production designers. They understand the importance of how to control a show," emphasized Wiseman, "and how to let the LD drive that show, and carry out the vision that they, as production designers, were tasked to bring. It's a niche now, but it will become the norm. They've seen the future, and acted on it."