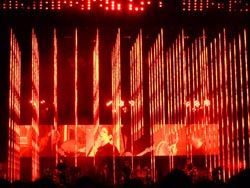 Radiohead on tour with L-ACOUSTICS.OXNARD, CA--Longtime L-ACOUSTICS user Radiohead has returned to the road this summer in support of its latest album, In Rainbows, which shook up the record industry when it was first made available online last October for basically whatever price fans chose to pay.

After a handful of initial US dates starting in May, followed by a European/UK tour in June and July, the highly innovative and critically acclaimed band now returns to the States for the entire month of August before heading on to Japan for additional performances.

Firehouse Productions of Red Hook, NY, is serving as the sound provider for the US tour legs, with Wigwam Acoustics of Heywood (Manchester), UK, handling the European dates.

"With the exception of two shows at Bercy in Paris, all of the concerts are outdoor shows -- stadiums, sheds, green fields, or amphitheaters -- which make the sound design very challenging," notes el Barbari. "However, I am impressed by the power of the 32 L-ACOUSTICS SB28 subwoofers driven by LA8. We have also used the SB28 in cardioid configuration on several shows now and the results are impressive."

Jim Warren, Radiohead's FOH engineer from day one, adds, "I still sometimes find myself going to switch off my nearfield monitors in an arena show, only to find that they are off already. The clarity and precision of the V-DOSC system continues to surprise me even after 10 years of using them in just about every live sound environment there is."